Did our ancestors shag chimps (ancestors)? 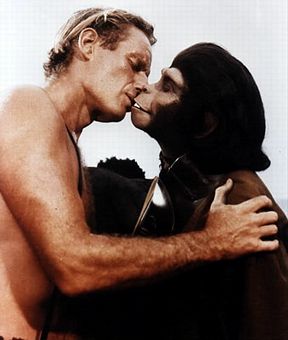 So, do you come here often? Can I buy you a drink? What's that? A banana daquori? Sure. How's about you and I go some where quieter, maybe grab some food?I know this great little place just off the High Street, they serve termites there, you like termites right? Of course you do, what with being a chimp and all. Get your... well, you don't wear a coat, but any way, you've pulled.

Above is a made up chat up line that probably never happened. I've started this post with it as a rubbish joke in reference to a paper recently published on Nature.com which suggests that the divergence of the human and chimpanzee lines may not have been the clean break 7 million years ago as previously thought. The new research by Patterson et al, published online ahead of print, uses the principle of the molecular clock and reckons that the two lines may have diverged as recently as 5.3 million years ago, and further analysis indicates that the X chromosomes diverged later which implies the two lines successfully interbred.
The molecular clock is a sweet "trick" used by geneticists to work out when two populations diverged. This uses the principle that the genome, or parts of the genome, accumulates mutations at a fairly constant rate, and so the more differences between the genomes of the two populations (or species) the greater the time since divergence. I'm loathed to do this, but here is a wikipedia enrty on it, better to look at the papers listed here.

Currently, the authors of this research are very careful to point out that the chimp humping part of this research is at present only a hypothesis, though that hasn't stopped people, myself included, getting rather excited by it all. Any good biologist worth their salt (and a few rubbish wannabes like me) will be able to tell you that the accepted definition of species isn't all that good at describing the messy world of real life, and it's good to see we were no different back in the evolutionary day. Can we still interbreed with chimps? There is a likelihood that we can, since lions and tigers can produce offspring, and there has been a bottle nosed dolphin/false orca whale hybrid (a wholphin) that has successfully bred with another bottle nosed dolphin to produce a do-wholphin (I'm proper sorry about the source of the link, makes me doubt the story, anyone got a better one?). I say likelihood, but I have nothing to back this up, such as how related these species are to one another compared to humans vs chimpanzees, or when they diverged. Rubbish I know. Scrap the likelihood bit. That or go and try for yourself. A friend of a friend says there are places in Indonesia where you can fornicate with Orangs, so try and find a similar place but with chimps. You sick, sick man (or woman, don't want to sexist. It's been had enough to write this without using "man" to describe our species).

I am disappointed by the fact that the words Humanzee or Manpanzee feature not once in this paper. If I were the reviewer I'd insist on it.

I've only gone and bloody wrecked the blog. Dang. That'll learn me for trying to make it look nicer.
It does look nicer though doesn't it? Shame I've lost all our links. Oh well, they weren't very good. By the time anyone reads this (i.e. never) I should have put some new links in. I imagie they will be similar to the old ones.
Posted by Ne at 3:03 pm 2 comments:

Today I have mostly been trying to stain some honey so that the pollen can be visualised can the source flower can be id'ed. Did I ever mention that I'm doing me PhD in developmental biology? NOT Palynology. Oh, this is why my project is moribund.


Apparently the flavour of honey is in some part dependent on the flowers the bee collected her nectar from. This being a hard nosed science blog (stop sniggering) I should back this up with some hard data and a couple of peer reviewed papers. However, I've already wasted too much time finding out about pollen stains to be bothered to look it up. That and the fact that as a mammal biologist, I wouldn't have the slightest idea of how to find that sort of stuff out. 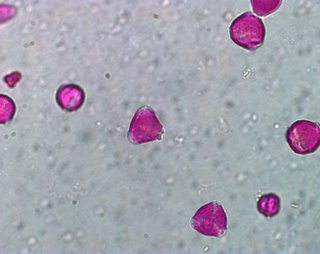 Here is a picture of the honey pollen I stained with a fuschin basic jelly (3.5g gelatin dissolved in 20ml water at 50C, add 25ml glycerol and o.2ml phenol. Mix at 50C. Add Fuschin basic dissolved 1% in IMS or Ethanol until a rich pink colour, in case you are interested). A prize goes to the first person to email in with the correct analysis if the pollen.
Posted by Ne at 4:24 pm No comments:

It's a Saturday, so there is a fair chance that, like me, you are feeling a little delicate from excessive alcohol (in the form of ethanol) intake last night. I bet that you are not a mug and have gone to work though. I am, so I have. Rubbish.


Do you have a hangover remedy you always rely on? In my experience many people need eggs on the morning after, possibly accompanied with some salty pig flesh all covered in brown sauce and in a sandwich. Or you may prefer the "cleaning" effect of some fruit and cold porridge (muesli). You'll probably be wanting a nice cup of tea with that. And water. Lots of water. When I was an undergrad I used to swear by a BLT with chili sauce washed down with Oasis Citrus Punch, or in severe cases Lucazade Sport ("its gets to your thirst, fast"), whereas this morning I had a grilled halloumi cheese sandwich with garlic yoghurt sauce. But that's because I'm a bourgeois get.


Well it seems that all your remedies are no more affctive than the next one, accoring to not so new research published in the BMJ ages ago. Pittler et al conducted a review of 15 papers investigating various hang over cures, seven of which were rejected as they were non-randomised. Although they do list 20 cures they found ion google, including Marmite on toast (hmmmmmm), kidney dialysis (an option not availible to most I feel) and "russia party" (what the hell is this?), the cures included in the trial are all not things I've ever tried, borage for example. They did not include a grilled halloumi cheese sandwich.
Worringly for me, they highlight that more need to be understood of the pathology of the hangover. I'm sure that the average university has enough drunken idiots (I have no idea who these people are).

I have devised the perfect hangover cure, or atleast what i always want to be done to me when hungover: I want to take my brain out or my skull, and put it in a nice cool bowl of clean saline, swish it about about, then put it back in.... bliss.
Posted by Ne at 2:02 pm No comments: To celebrate the brave new world of web 2.0 and the semantic web, or some thing, I did a search for the tag science on Flickr.
Look what the first image was. Ace, Darwin and some homonids in Lego form. More science should be represented in lego.

The entry for this photo is sweet too. Explains each of the guys. Not sure if this dude, Kaptain Kobold, is a science geek or simply an admirer, but props to him. Truly this is science embiggment.

edit: now I've worked out how to do pics n'all. Watch out New Scientist's Short Sharp Science Blog, just watch out...
Posted by Ne at 5:09 pm No comments: