Humanity may split into two sub-species in 100,000 years' time as predicted by HG Wells, an expert has said.

But in the nearer future, humans will evolve in 1,000 years into giants between 6ft and 7ft tall, he predicts, while life-spans will have extended to 120 years, Dr Curry claims.

Physical appearance, driven by indicators of health, youth and fertility, will improve, he says, while men will exhibit symmetrical facial features, look athletic, and have squarer jaws, deeper voices and bigger penises.

Women, on the other hand, will develop lighter, smooth, hairless skin, large clear eyes, pert breasts, glossy hair, and even features, he adds. Racial differences will be ironed out by interbreeding, producing a uniform race of coffee-coloured people.

However, Dr Curry warns, in 10,000 years time humans may have paid a genetic price for relying on technology.

Spoiled by gadgets designed to meet their every need, they could come to resemble domesticated animals.

errrrm, right. Isn't this what Peter Kolosimo said? But didn't he blame the moon being closer to the earth?

Further into the future, sexual selection - being choosy about one's partner - was likely to create more and more genetic inequality, said Dr Curry.
The logical outcome would be two sub-species, "gracile" and "robust" humans similar to the Eloi and Morlocks foretold by HG Wells in his 1895 novel The Time Machine.

"While science and technology have the potential to create an ideal habitat for humanity over the next millennium, there is a possibility of a monumental genetic hangover over the subsequent millennia due to an over-reliance on technology reducing our natural capacity to resist disease, or our evolved ability to get along with each other, said Dr Curry.

He carried out the report for men's satellite TV channel Bravo.

Yes, believe it or not, this post isn't about fossils or evolution.
I just got sent this rather pretty animation of some cellular mechanism. Rather nifty, I'm sure you'll agree. Shame the music is really quite wank. Really, I watched it initially whilst listening to Elbow. It was good. I just watched it again to try and list the mechanisms being shown, but I was too distracted by the sub-Playstation style plinky plonky wanna be Future Sounds Of London. Anything else would have been better. Even, and perhaps especially, a song I wrote once about science. It consisted of one word, which was science, sung over and over to the tune of Auld Lang Syne. Yes, that'd be MUCH better.
Oh well, other than that, it's nice. A good for visualising intracellular activity, especially for school kids. I'd make them watch it, and then test them on what they saw. That's if they all don't need to be rushed to hospital with bleeding ears caused by the rubbish soundtrack. 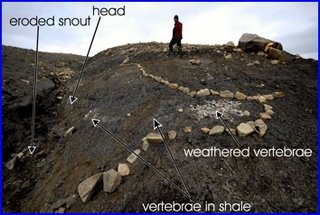 Dr. Jørn Hurum, Hans Arne Nakrem and their paleoentologist chums from the Norwegian Natural History Museum in Oslo have been up to Svalbard for a short two week field expidition, during which they uncovered 28 new species of plesiosaurs and icthyosaurs. The biggest (and therefore bestest) of which is a 10 meter plesiosaur, with a 2 meter long head. Look at this picture of it in the ground. See how they usfully put a man in it as scale. Look how that bit of dirt to the right is the head. 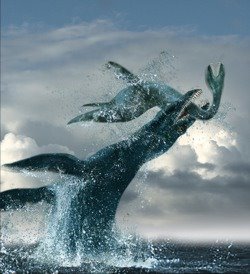 Yeah, this is why paleoentology gets kids excited. That one massive monster is eating that other one! Look, that's sweet! How much cooler could botany be? The answer is none. None more cooler. 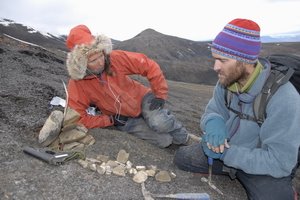 Good shit. Well done Norwegian bone dudes, though it does look a tad chilly, I'll stay in the lab for now.

Not so well done the BBC. Specifically, not so well done the BBC news website. When ever there is anything in the news about dinosaurs, human ancestors or other prehistoric animals, nine times out of ten they will stick some of their pictures from Walking with Dinosaurs/Cavemen/Beasts on their front page. Fair enough, they cost lots of money to make, but this is over kill. Here's todays example: 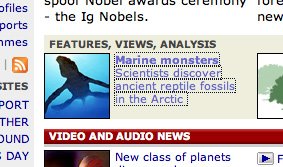